A Luxurious Afternoon Tea For 15 Cents!

The Best Movies You Never Heard of – Part 1

E.S.T. in the Slow Cooker

Photo by Jason Riedy,
used under a Creative Commons license.

While both of my sisters are wonderful cooks, I think I just didn’t get that gene. I mean, I’m OK, I can read a recipe (following it is whole ‘nother thing), but mostly I just can’t be bothered. Sandwiches are easy though. So are quesadillas. Neither of those makes much mess. Use the oven or the stove? Sheesh. Too many dirty dishes. I do like my rice cooker but I admit, I love my slow cooker. I can just throw stuff in there, and at the end of the day, voilà! perfectly cooked food! Easy peasy.

Most of my recipes are simple. VERY simple. That often means that they are also relatively inexpensive to make as well. This is very good since I haven’t had a full-time job since about 2009 and no regular work hours since the end of 2011. I think they are tasty too. Easy, Simple, Tasty – how can you beat that? Some of them might even be considered “healthy”, but since I’m not a doctor or nutritionist, I can’t say for sure.

I’ll start off today with one that I cook probably twice a month. I got the recipe years ago when I used to hang out on the Quilter’s Board. I’ll give you the basics here, then some variations at the end.

Method:
Remove the ‘innards’ packet from the cavity.
Rinse and pat the chicken dry.
Salt & Pepper to taste.
Place in slow cooker, set on Low.

Be careful when removing from the slow cooker. It will fall apart. The first time I made this I reached in with my tongs and grabbed a leg. I came out with only a clean bone!

This is what happened when I tried to take my last batch of chicken out of the slow cooker.

You can serve it with veggies and rice or potatoes if you like. Since it falls apart it lends itself easily to burritos or tacos. If you have some chicken stock, veggies and noodles, you can use some to make chicken noodle soup. That’s what the meat from those bones made.

Variations:
Use any of your favorite herbs and spices with it. Now I usually add oregano, chili powder, garlic powder, cumin, onion powder, and some kind of chicken rub seasoning that I probably got at Big Lots once upon a time.

You can also just use chicken pieces and cook them the same way. I have one small slow cooker that’s just big enough for a couple good-sized chicken breasts or 3 big chicken thighs for those times when I don’t feel like eating the same thing all week. Frozen chicken can be used too, like one of those bags of boneless, skinless chicken parts. Just dump it in, sprinkle your choice of spices and set it normally.

Since the chicken is very easy to de-bone after cooking, it also is easy to use in your favorite enchilada recipe too. 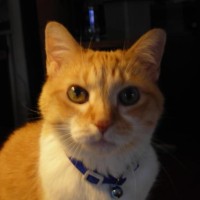 Permanent link to this article: http://bluecollar-blacktie.com/e-s-t-in-the-slow-cooker/